One of the more fascinating stories we have heard in 14 Henrietta Street is that of the toys made by German World War II soldiers interned in the camp on the Curragh, Co. Kildare being sold as Christmas gifts on the streets of Dublin.

In sharing some Christmas memories from past residents of the tenement buildings in Dublin, our tour guide Gillian Ryan told us:

“Listening to people coming in and out, what kind of toys they would have got and what traditions they would have had - the one thing that caught my eyes and ears when I first heard it was, I’ll take us back to the second World War.

Now when you listen to the testimonies they were treated very well. But of course they had to make their own money, and what they used to do was, they used to make wooden boats and wooden aeroplanes and stuff and they used to sell them. So a lot of the children around Dublin in particular would have boats and planes that were actually made by German soldiers in the second World War.” 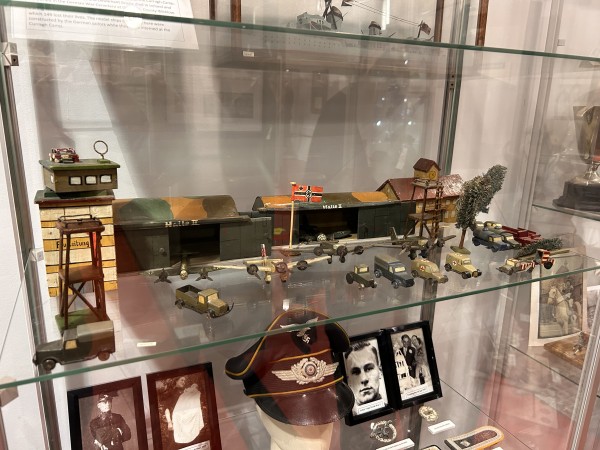 Looking into this further, and according to the curragh.info website:

"K-Lines" (No.2 Internment camp) was built in 1939 in the East side of the Curragh Camp. The main function of the K-Lines was the internment any servicemen of either the axis or allied forces, who were captured on Irish soil during the Second World War. It would prevent their escape and thus prevent them returning to their respective countries and rejoining the war effort.

Many of the soldiers would have landed in aircraft either damaged during battle or low on fuel, forcing the pilots to crash or emergency land. Luftwaffe pilots would land in Eire in preference to interment in Britain.

It appears that the German soldiers had a certain amount of liberty in the Camp:

"In September of 1940, the German minister to Ireland, Edouard Hempel, visited K-Lines where he found the German internees to be uncomfortable with the conditions of their imprisonment. Hempel requested that there be a relaxation of the prison like procedures and during October 1940, the Irish Department of External Affairs agreed to grant certain liberties and privileges to the German internees. The German officers were paid £3 per week and the other ranks £2 per week as well as each to purchase civilian clothing. These payments were billed to the German government." 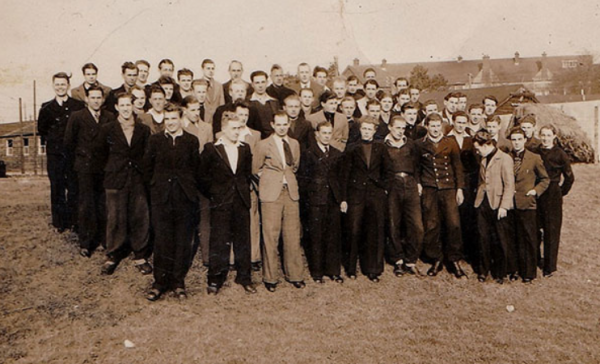 Above: German Luftwaffe personnel at the Curragh in 1945, with ‘Tintown’ internment camp in the background. (Curragh Military Museum)

"The internees were allowed to attend religious services. They were given garden tools to cultivate their own vegetables. They were facilitated with a wireless radio for entertainment and keep in touch with the affairs of the war. Internees could avail of a postal system, which was however strictly censored. There was also a limited parole system introduced for all ranks allowing them to leave the compound, on their word of honor that they would return by the times laid down."

According to military history researcher Luke Diver on the History Ireland website:

"In an effort to raise money and replace their lost income during the last year of the conflict, many Germans sought the opportunity to gain employment outside the camp. Although there were government and trade union concerns regarding the impact that this might have on Irish citizens seeking employment, it was generally agreed that the Germans should be allowed a source of income through casual employment. Throughout the local area surrounding the Curragh, Germans worked as labourers, tailors, stable hands, gardeners, painters, chefs, butchers, farmers and turf-cutters. Consequently, many Germans integrated well into the nearby communities and developed friendships with locals from the neighbouring towns of Kilcullen, Newbridge and Kildare; some even married local girls.

As displayed at the Curragh Military Museum, another form of income was generated by the manufacturing of model aircraft, ships, military vehicles and barrack buildings from scrap plywood found around the camp. These were sold as gifts to members of the Irish army, their families and locals, and the Germans raised hundreds of pounds." 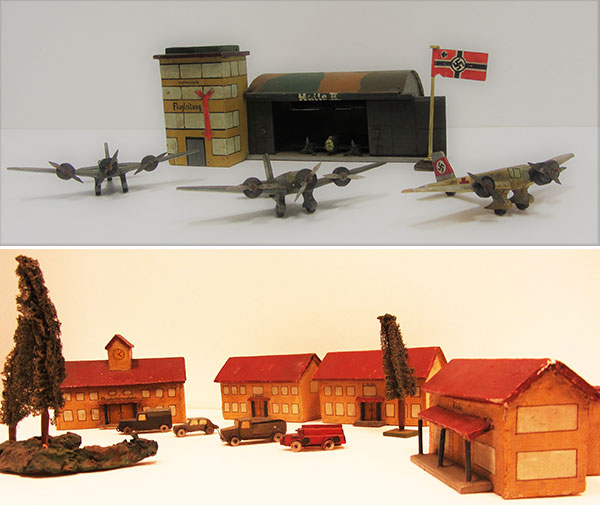 Above and below: Models crafted by German servicemen during their internment at the Curragh Camp. (Curragh Military Museum)

We contacted the Curragh Museum and Corporal David Ahern photographed these models for us, allowing us to share them with you. 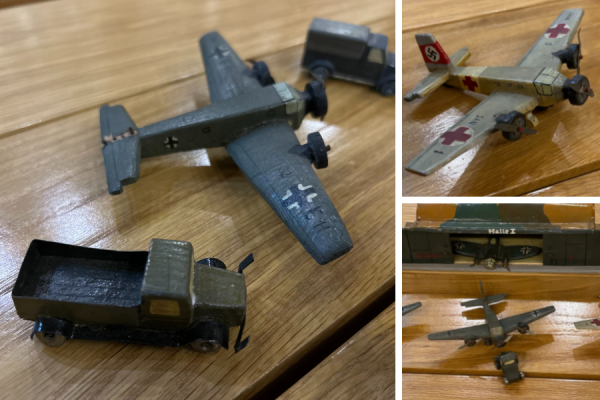 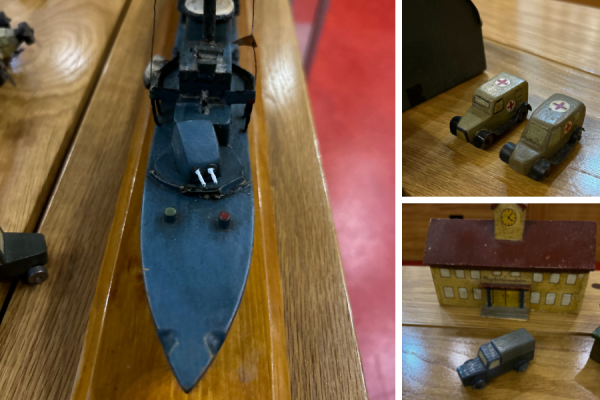 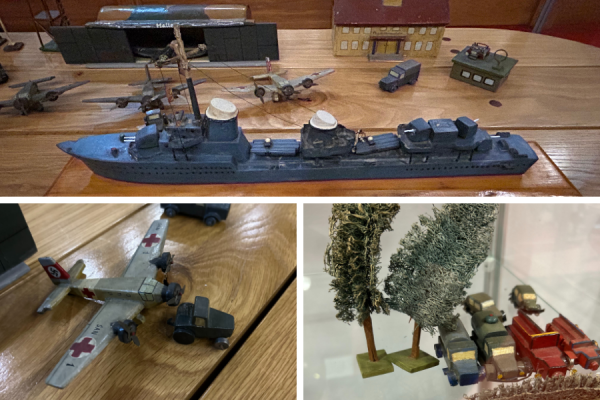 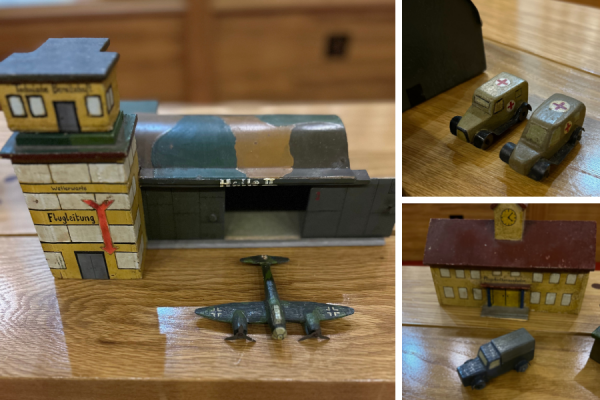 We would love to hear from anyone who may have one of these old toys saved from the time.

Children and families then would have had little to no idea about the atrocities perpetrated during the War - German propaganda would have been in full flight, with William Joyce, locally known as Lord Haw Haw, broadcasting Nazi messages to the UK from Germany during the war, among others. It wasn't to be until many years later that the Irish public would learn about the wartime atrocities committed by the Nazis.

The History Ireland article on this matter does conclude with:

Despite their incarceration, many Germans retained happy memories of their time in Ireland, subsequently returning on many visits to County Kildare, with a few managing to become Irish citizens. Importantly for the heritage of the Curragh Camp and the Irish state, two of the bungalows that housed the Germans at K-Lines still remain and are in residential use. The corrugated-iron-clad chalet-style bungalows are considered a unique and rare artefact.